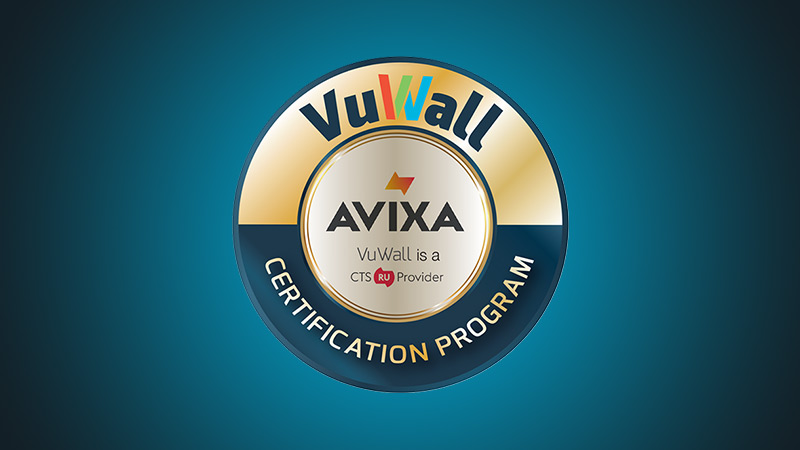 MONTREAL — VuWall, a leader in video wall control and AV network management, today announced its AVIXA accreditation of the VuWall Certified Specialist training program. Designed for system designers, technical sales, consultants, and field and service technicians, the training is free to qualified resellers and is offered several times each year at VuWall’s Montreal and Stuttgart locations. Resellers who complete the training can earn up to 17 renewal units (RUs) toward AVIXA’s Certified Technology Specialist (CTS) credential after successfully completing written and practical exams.

“With the increasing demand for video wall and visualization solutions globally, we’re invested in providing AV professionals with training resources that will allow them to take advantage of these opportunities,” said Paul Vander Plaetse, CEO. “This program will give them the assurance that they need to expand their expertise confidently. They will tackle several facets that must be considered when designing, configuring, and maintaining VuWall’s video wall systems.”

Participants who take this course will be able to present VuWall’s entire line of solutions to potential end-users and assist in designing a video wall project, primarily for the VuWall VuScape series of video wall processors and TRx AV Network Management System.

This training will enable graduates to deploy and troubleshoot VuWall’s line of products autonomously. By the end of this course, they will feel comfortable providing onsite technical support to end-users. They can expect a deep dive into the configuration of the system for a single and redundant setup. This course also covers scripting, troubleshooting with the most common scenarios, handling updates, and licensing.

Level III completes the certification training, enabling graduates to feel confident in being the end-user’s first line of support for the VuScape and TRx series, with a much deeper understanding of the processors. This course examines the database, video card information, maintenance, installation procedures, servicing, and troubleshooting.

VuWall already has close to 40 certified VuWall specialists from 23 resellers in 20 countries. These include AVI-SPL, CBCI Telecom, Mindstec Distribution, and Solotech, among others.